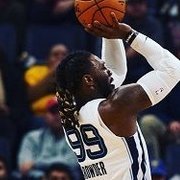 By grizzgolf, May 14 in Grizzlies Team Talk